…to understand modern economic history, you really need to understand just a single word. The word is growth. –from Sapiens (2014)

Humanity is far more materially wealthy today than any time in the past and our collective wealth continues to explode: 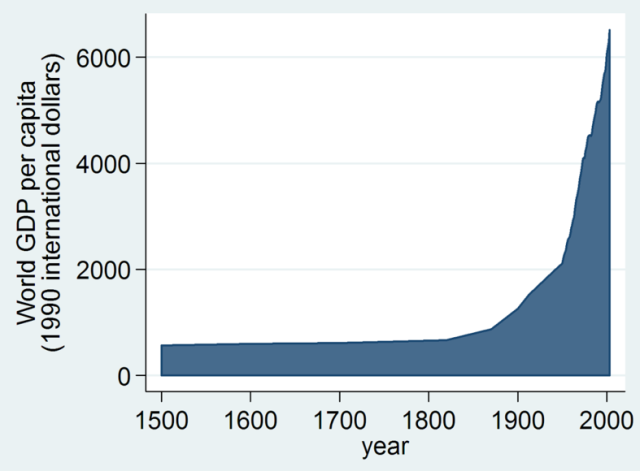 One question that has occupied the minds of environmentalists for decades, however, is: “Can this economic growth be maintained indefinitely, and what happens when we run up against physical limits to growth?”

Yuval Noah Harari’s book Sapiens has what I consider to be a profound section (Chapter 16: The Capitalists Creed) in which the fundamental aspects of the modern economy are described from first principles. Harari uses a simple example that I think is particularly illuminating in that it shows how our current system not only produces growth but depends on constant growth to survive. 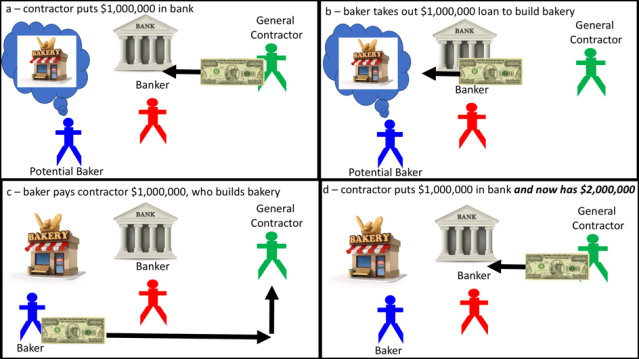 Harari describes a situation involving a general contractor, a banker, and an entrepreneurial baker who is dreaming of starting a bakery.

The baker thinks she has a great business plan for a bakery but she cannot make her dream a reality without a loan. She goes to the bank and pitches her plan, requesting a loan of $1,000,000 to construct her bakery. The banker is convinced that the bakery will be a good investment and loans the $1,000,000 to the baker (‘panel b’ above).

Here’s where it gets interesting.

Where does the extra $1,000,000 come from? It comes from the future. Specifically, the difference between the total amount of real money ($1,000,000) and the amount of money that the contractor has in his account ($2,000,000) is attributable to the future income of the baker. In other words, the banker believes that as time goes on, the bakery will be successful and the baker will repay the loan with interest. So eventually, if the contractor asks to withdraw his $2,000,000, the money will be available. The whole system is based on borrowing from the future in order to finance the present.

Harari notes that under current US banking law, banks are allowed to loan ten times more money than they actually have on their books. That means that at any given time, over 90% of banks’ assets haven’t actually been created yet – we are all just collectively assuming that they will be created in the future. This system only works if the future is always able to produce more wealth than the present, allowing the cycle to be maintained. In other words, the system requires perpetual growth or it will collapse.

The economy can grow due to the discovery of new resources, the growth of the labor force, improvements in technology or increased productivity due to increased specialization.

Over the past couple hundred years, these things have outpaced their limiting factors, allowing wealth to explode. But it is difficult to see how this can be sustained forever. We can’t grow the labor force indefinitely, there are not infinite material resources (at least not on earth) and there are limits to what specialization can achieve.

Technology is perhaps the most difficult thing to put a limit on and there are many futurists who expect technology’s exponential growth to continue to the point of a technological singularity.

Despite this, it is difficult to see how we will not eventually reach fundamental limits on growth that will undermine the very basis of the system we have created. Geoffrey West has pointed this issue out in his book Scale (touched on in his TED talk and also described in Bettencourt et al., 2007). He notes that so far, society has continuously been bailed out by innovations that have allowed us to continue to grow exponentially (actually super exponentially): 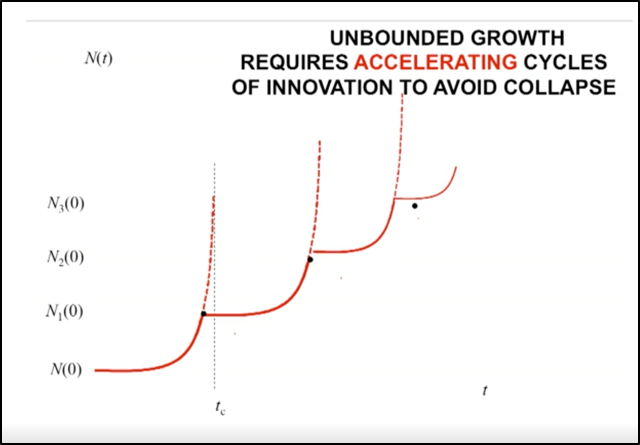 So basically, if the wildest predictions regarding the ‘technological singularity’ do not come to pass, we will eventually run up against limits where growth can no longer be maintained and the foundation of the global economic system will be fundamentally undermined. (This is hardly a new realization and it has spawned entire fields of thought such as Post-growth and Steady-state economics)

It should be noted that environmentalists have been warning about unsustainable growth of human population and resource consumption for a long time. High-profile predictions of collapse due to unchecked growth have been made since at least Malthus’s An Essay on the Principle of Population in 1798. There were also high-profile predictions of imminent disaster in the 1960s and 1970s epitomized by Paul R. Ehrlich’s The Population Bomb in 1968 and the Club of Rome’s The Limits to Growth in 1972.

These writings warned of imminent catastrophes that have not been realized. Technological innovations and the continuous discovery of new resources have allowed the system to maintain itself, resulting in the amazing growth in wealth I highlighted above.

But does the fact that growth has been maintained historically, imply that growth can be maintained indefinitely into the future? I see no reason why the latter should follow from the former. Physical limitations of the environment and the fact that material recourses are finite would seem to suggest that growth cannot be maintained indefinitely. If that is the case, society should seriously consider how to gradually transition from our current system to a more sustainable one. This certainly seems preferable to having to build a new system from scratch after the old one has collapsed.